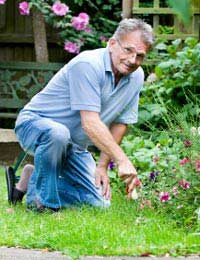 Fred Johnson moved 200 miles south to be near his son Darren after the death of his wife. Becoming part of his new community was a challenge he didn’t expect.

‘After I lost Helen so quickly I was depressed and lonely. We did everything together and I just didn’t expect one of us to die so quickly. We weren’t even seventy and had so many things we wanted to do and see together. I’m not ashamed to say that I hardly left my armchair during the first six months and looking back my neighbours and friends were a godsend sending in food and doing my shopping.

But it was our vicar that sat down and told me that Helen would be angry with me for giving in so easily. He reminded me I had a son and two grandchildren to think about and shouldn’t just give up. It was the thought of Darren and the youngsters that made me make the drastic decision to move south to Surrey and live near my remaining family.

To be honest whoever it was that bought my house got a good bargain as I didn’t haggle when they offered a lower price and within two months of the for sale board going up I had moved into a retirement flat under a mile from Darren’s place. To begin with I busied myself painting the flat and making it homely. I kept the things that reminded me of Helen such as the rugs she’d made and the curtains she’d sewn. Darren’s wife Shirley altered them to fit the smaller windows and they looked a picture. If Helen could have been there to share the new home I would have been happier still.

Soon I was bored and needed to get out of the flat. I no longer had a garden to tend and so tried to join a local rambling club to get some exercise and fresh air. The exercise was fine but no one spoke to me, they were in their own little groups and once they had quizzed me about my home and life they ignored me. Next I joined a woodwork class but with being busy making a stool there was never the chance to make friends. I went back to sitting in my flat day after day and getting gloomier by the week.

Helping at the Local School

It was my elder grandchild Suzy that jolted me out of my misery she was doing a project on the 1960’s and showed me her project while I was babysitting one day. It was apparent that whoever taught the subject had never lived in the 1960’s so I helped Suzy and wrote a note to her teacher. Before I knew it I had been invited to talk to the class about my life during that time. I took our old cine projector and entertained the kids with films of our holidays and our now strange clothes and lifestyle. Miss Barrymore, the young teacher was enthralled and I must say I enjoyed myself around the youngsters. I was invited back to read stories and it was then I noticed the rather bedraggled school garden and offered to give it a spruce up.These days you’ll find me down the school as a volunteer doing a bit of gardening and showing the kids how to grow vegetables. I had to have CRB clearance but the headmaster saw to all that and you know I love it. The children had given me a new lease of life and through them I’ve met the parents and the grandparents. These days I’m never home and moving south to a new community was the best thing I ever did.’
Next Page

Redundancy Forced Me to Downsize: A Case Study